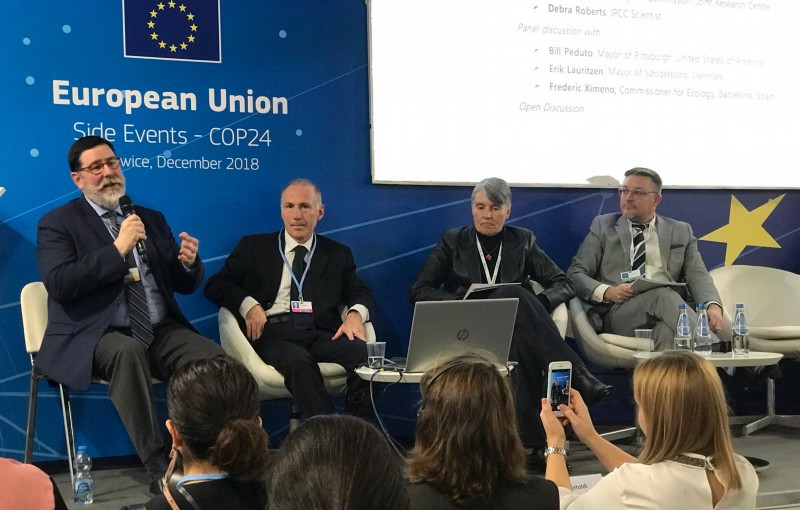 The Intergovernmental Panel on Climate Change’s (IPCC) Special Report on Global Warming of 1.5°C left no question about the future: at the current rate of warming of 0.2°C per decade, global warming will reach 1.5°C above pre-industrial levels around 2040, disrupting basic social and economic activities around the world.

Serious consequences are already being felt, and can be expected across all natural and man-made sectors, including more frequent natural disasters, greater susceptibility to vector-borne pandemics, greater destruction of property, drought, famine, and more. If average temperatures exceed 1.5°C, we can expect even greater consequences.

At the 24th Conference of Parties to the United Nations Framework Convention on Climate Change in Katowice, Poland, we — scientists, city practitioners, and NGOs — have tried to unpack what it means for cities to limit global warming to 1.5°C in the next 12 years.

Indeed, transition is needed in cities as much as in transportation, buildings or energy, because all 1.5°C consistent pathways require action in and by cities, from Pittsburgh to Seoul, Chefchaouen or Edmonton.

Cities are at the front lines of this challenge, seeing the immediate consequences of climate change. However, they can often take action faster and more easily innovate towards scalable solutions than other levels of government. How cities choose to develop now will impact whether we curb global temperature rise and whether we can withstand the inevitable impacts of the change that is already a foregone conclusion.

In India, for example, cities are expected to host 200 million more people by 2030. Two-thirds of India’s buildings that will exist by 2030 remain to be built. Choosing low-carbon infrastructure options allows them to address climate change at the local level while paving the way for a better quality of life for India’s citizens.

The multiple pathways to the future will be determined in no small part by the actions of officials and stakeholders who influence urban economies, urban form, and infrastructure: The critical connectivity between urban and rural areas, as well as behavioral choices, are key to change the trajectory of temperature increase.

The impacts of climate change can be seen the world over, from the wildfires in California to the floods in Spain to the droughts in Africa. Climate change has no boundaries, nor should our solution. We do not have the luxury of doing one thing at a time; systemic change at this scale requires a coordinated effort on many fronts. To change the trajectory of temperature increase, we have to act together across all levels — locally, regionally, nationally, globally — and it has to be now.