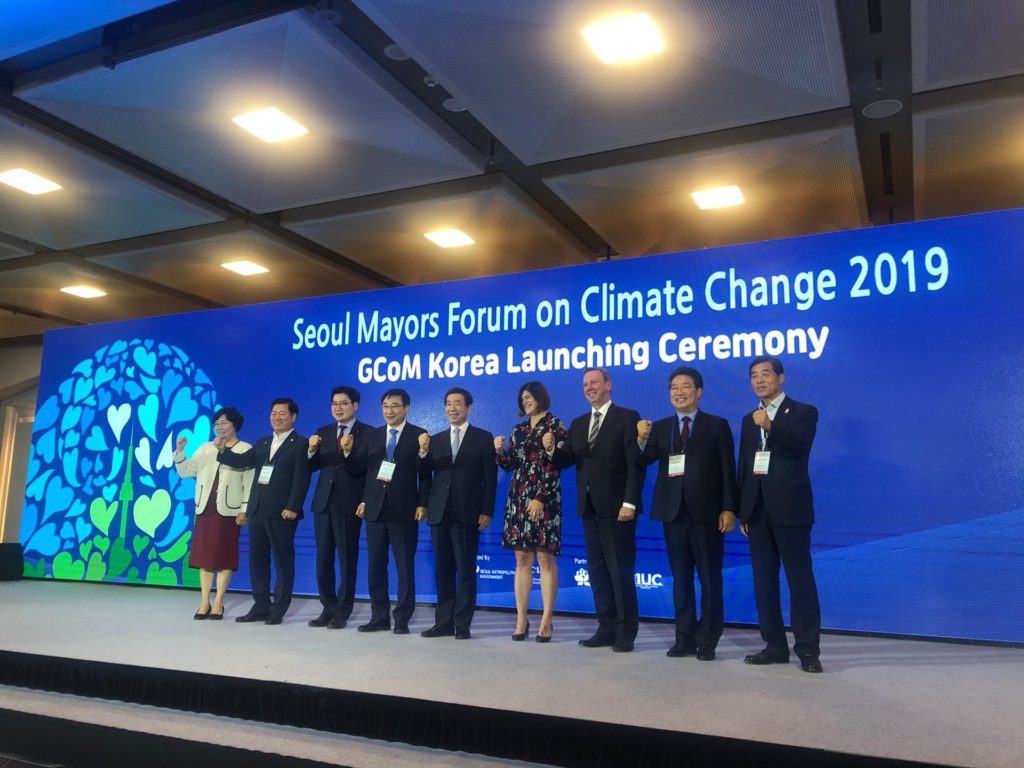 October 24, 2019 – Three new cities in Korea committed to the Global Covenant of Mayors for Climate & Energy (GCoM) on Thursday. Gwangmyeong City, Dobong-gu, Gangdong-gu were welcomed by current GCoM signatories of Seoul, Dangjin, Ansan in their commitment to implement the Paris Agreement during a signing ceremony that took place at the Seoul Mayors Forum on Climate Change 2019. 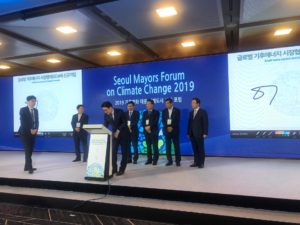 Mayors from six Korean cities joined Amanda Eichel, Executive Director of the GCoM secretariat, and Yeonhee Park, Director of ICLEI office in Korea, for the ceremony.

The cities will act as key partners to national governments in combating climate change and achieving the 2030 Agenda for Sustainable Development, as well as the New Urban Agenda and other international commitments.

A total of eleven local and regional governments have joined GCoM in Korea so far: Seoul, Suwon, Changwon, Daegu, Ansan, Michuhol-gu, Dangjin, Jeonju, Gwangmyeong, Dobong-gu, Gangdong-gu. They are part of the largest global alliance for city climate leadership, built upon the commitment of over 10,000 cities and local governments from across the world, representing more than 800 million people.

“GCoM Korea will bring together all the networks working together to support cities in Korea to achieve climate action, making it even easier for Korean cities to navigate and get the implementation support they need,” said Ms. Eichel.

Giorgia Rambelli, Head of the International Urban Cooperation (IUC) Coordination Unit, moderated the breakout session, where mayors from current GCoM signatory cities were invited to give their inputs on how to catalyze the partnership in Korea.

“We believe that participation by Korean cities in GCoM has great meaning,” said Mrs. Park of ICLEI during the breakout session on GCoM in Korea. “It will allow us to cooperate with international partners in a more effective way.” Mrs. Park also discussed cooperative measures with Korea Environment Corporation (KECO) on reporting by the GCoM committed cities in Korea.

The original version of this article appeared on ICLEI iNews