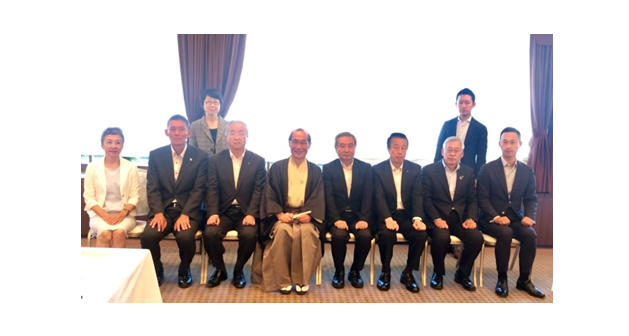 Tokyo, Japan. On the 8th of August, the Steering Committee of the “Covenant of Mayors Japan” had its formal debut. The Steering Committee is composed of ten members, including several mayors and representatives of relevant Japanese organisations: besides the mayors of the cities of Niseko, Tokorozawa, Kaga, Toyohashi, Kyoto, Yosano, and Goto, deputies from the Global Environment Bureau of the Ministry of the Environment, of the National Center for Climate Change Actions and of the Delegation of the European Union to Japan form part of it. Mr. Daisaku Kadokawa, the mayor of Kyoto City, was unanimously elected as chairman of the committee, while Mr. Kenya Katayama, the mayor of the town of Niseko, was appointed as acting chairman.Mr. Hiroshi Kamakata, administrative vice minister of the Japanese Ministry of the Environment, opened the meeting with some congratulatory speeches and stated: “At a time when the effects of climate change are becoming a matter of concern, we would like to sincerely support the ‘Covenant of Mayors Japan’. Local efforts are important for a carbon-free society. As stated in the concept of ‘Regional Circular and Ecological Sphere’ by the Ministry of the Environment, we hope that this initiative will expand the scope of environmental initiatives and promote policies to resolve regional issues.“

In the course of the meeting, the secretariat of the “Covenant of Mayors Japan” reported to the committee members on the progress and current status of the coalition and presented the plans for future activities, which include the development of a simple reporting platform. The committee then decided on the ‘Implementation Guidelines for the Covenant of Mayors Japan’ which touch upon the topics of commitment, the formulation of action plans, implementation and monitoring, as well as reporting.

The secretariat plans to engage more municipalities in the coalition and will initiate support measures, such as dispatching experts to advise them on energy-related projects that promote local energy production for and corresponding to the local energy consumption.