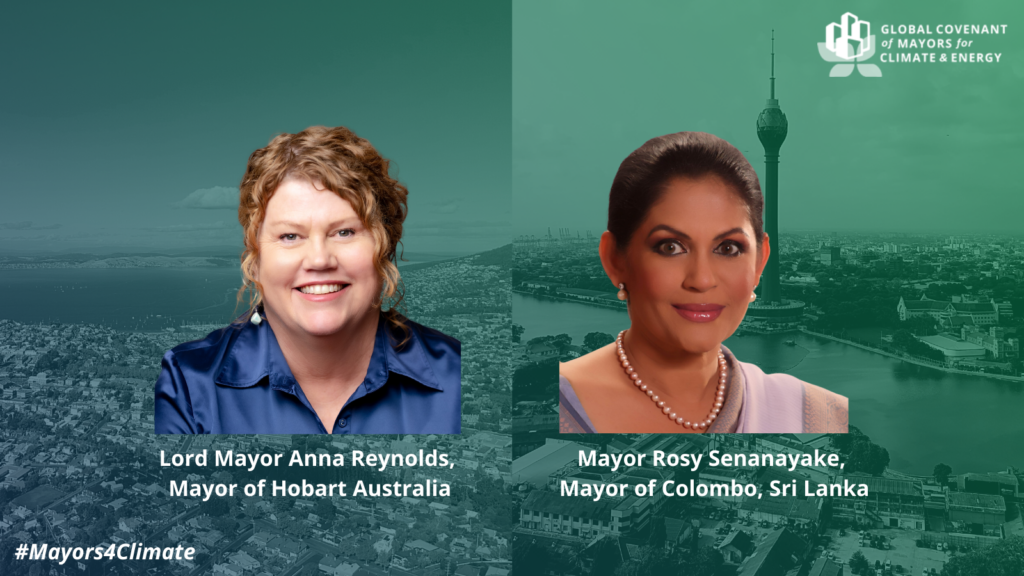 The Global Covenant Board leads the largest global alliance for city climate leadership, representing more than 10,000 cities around the world committed to addressing climate change. The Board is co-chaired by Michael R. Bloomberg founder of Bloomberg Philanthropies and Bloomberg LP and 108th Mayor of New York City, and Frans Timmermans, European Commission Executive Vice-President for the European Green Deal.

In their role as Board Members, Lord Mayor Reynolds and Mayor Senanayake will help steward their regions towards ambitious emissions reduction goals and serve as ambassadors for urban climate action on the local, national, and global stage.

Lord Mayor Reynolds will be a voice for the thirty-seven GCoM cities located in Oceania, which are home to more than six million residents. Oceania has been devastated by the accelerating and worsening impacts of the climate emergency, including unprecedented bushfires and rising sea levels. Cities in the region have been vocal about the need for global climate action, and more than 100 local councils in Oceania have formally declared a climate emergency.

Under Mayor Reynolds’ leadership, Hobart has committed to becoming a zero-emissions city. The Council has already reduced its emissions 87% below 2000 levels and will reduce its emissions by a further 20%. The City of Hobart will also achieve 100% net renewable electricity by 2040 and will work collaboratively with its residents and businesses over the next 2 years to set a city-wide zero emissions target. Hobart also has a target to see zero waste going into landfill by 2030, which will reduce city-wide emissions.

“It is an honor to join the Board of the Global Covenant of Mayors and to sit with Mayors from cities around the world,” said Anna Reynolds, Lord Mayor of Hobart. “Cities are facing more frequent and severe climate change-induced disasters, and action has never been more urgent. Together, with the Global Covenant’s more than 10,000 mayors, we will work towards a green recovery that starts in cities.”

Under Mayor Rosy Senanyake’s leadership, the city of Colombo has championed critical action on wastewater management and local infrastructure to help reduce flooding impacts. Mayor Senanayake is also a longtime advocate for women, children, and vulnerable populations, which has inspired her work to advance climate action and advocate for sustainable development.

“It is an honor to join my peers from cities around the world on the Board of the Global Covenant of Mayors. Mayors are on the frontlines of both COVID-19 and the climate crisis, and the only way that we will tackle these two crises is by working together at the global level,” said Mayor Rosy Senanayake “As a Board Member, I hope to mobilize bold climate action and resilience action in cities in South Asia and around the world, focusing on protecting our vulnerable communities.’

“We’re excited to welcome Lord Mayor Anna Reynolds and Mayor Rosy Senanayake to the board of the Global Covenant of Mayors,” said Michael R. Bloomberg, Co-Chair of the Global Covenant of Mayors. “Cities are on the leading edge of the fight against climate change, and we value the ideas and perspectives of mayors from across the world. Lord Mayor Reynolds and Mayor Senanayake will be important voices on behalf of Oceania and South Asia, two areas that continue to be hit especially hard by the climate crisis. I look forward to working with them to lead the charge on city climate action.”

“Lord Mayor Reynolds and Mayor Senanayake are strong advocates for climate action in Oceania and South Asia, and we welcome them to the Global Covenant Board,” said Frans Timmermans, Co-Chair of the Global Covenant of Mayors and Executive Vice President for the European Green New Deal. “An inclusive and truly global approach to climate action is critical to properly address the climate crisis. I congratulate Lord Mayor Reynolds and Mayor Senanayake on their appointments and look forward to working together.”

About the Global Covenant of Mayors for Climate & Energy
GCoM is the largest global alliance for city climate leadership, uniting a global coalition of over 10,000 cities and local governments and 100+ supporting partners. The cities and partners of GCoM share a long-term vision of supporting voluntary action to combat climate change and towards a resilient and low-emission society. GCoM serves cities and local governments by mobilizing and supporting ambitious, measurable, planned climate and energy action in their communities by working with city/regional networks, national governments, and other partners to achieve our vision. Led today by Michael R. Bloomberg and European Commission Executive Vice President Frans Timmermans, the coalition comprises cities across 6 continents and 139 countries, representing over 900 million people or more than 10% of the global population.