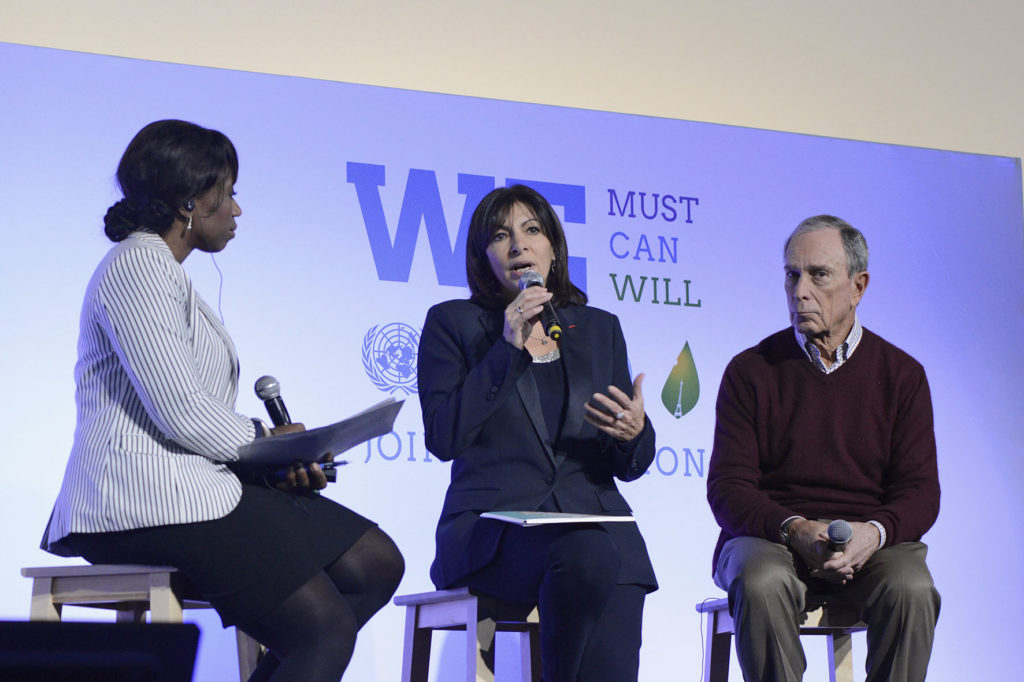 PARIS, FRANCE – Anne Hidalgo, Mayor of Paris, and Michael R. Bloomberg, the UN Secretary-General’s Special Envoy for Cities and Climate Change, announced today that they will co-chair the Climate Summit for Local Leaders, on December 4, 2015, during the United Nations’ 21st Session of the Conference of Parties (COP21) in Paris.

For the first time in more than 20 years of UN negotiations, a new international agreement on the climate may be achieved that will be applicable to all countries, with the aim of keeping global warming below 2°C during COP21 in Paris. Cities and local governments will be at the negotiations table alongside other stakeholders and are expected to lead the way to a climate solution.

In order to have a major impact on climate change, Michael R. Bloomberg and Anne Hidalgo will co-chair during COP21 a Climate Summit focused on mayors, governors and local leaders: the Climate Summit for Local Leaders, on December 4, 2015, at the City Hall of Paris.

The Climate Summit for Local Leaders will empower cities, local and subnational governments and their communities to set more ambitious targets for reducing carbon, create realistic plans for achieving those targets, and report consistently on progress in several ways. Most importantly, the Summit will help ensure that city voices are heard at COP21, and that their efforts are reflected in the treaty negotiations.

The Compact of Mayors, a global coalition of mayors and city officials pledging to reduce local greenhouse gas emissions, enhance resilience to climate change, and track their progress transparently will have a presence at the Summit along with other initiatives supported by local and subnational governments. The Compact of Mayors was launched in late 2014 by Special Envoy Michael R. Bloomberg, UN Secretary-General Ban Ki-moon and global city networks ICLEI-Local Governments for Sustainability (ICLEI), C40 Cities Climate Leadership Group (C40) and United Cities and Local Governments (UCLG), with support from UN-Habitat. In partnership with their peers around the world, to date, the Compact now boasts over 80 cities that have committed to the Compact—representing more than 280 million people worldwide or over four percent of the global population.

An especially strong push for commitments is being made in the run-up to COP21 and the Climate Summit for Local Leaders, so that cities, local and subnational governments are prepared to show their strong support, and act on, an international climate agreement.

“If we rise to the challenge, the U.N. summit in December can be a decisive moment in the global effort to confront climate change – and it is fitting that it will take place here in Paris, a city that has so often been at the center of world events,” said Mr. Bloomberg. “But in order for COP21 to have a major impact on climate change, nations will have to set more ambitious targets for reducing carbon, and create realistic plans for achieving those targets. Mayor Hidalgo and I know that cities can help them do both. The summit we are co-hosting in December will help ensure that city voices are heard at COP21, and that their efforts are reflected in the negotiations.”

Fifteen percent of the world’s largest cities have already committed to cutting their emissions by at least 70 percent by 2050.

“Our Climate Summit in Paris will be an opportunity for local leaders to strengthen their commitments, share experiences and learn from each other. We want to deliver optimal instruments to reduce the carbon footprint on urban areas, and allow, to the benefit of all, a healthier, more sustainable and more prosperous way of living” said Mayor Anne Hidalgo.