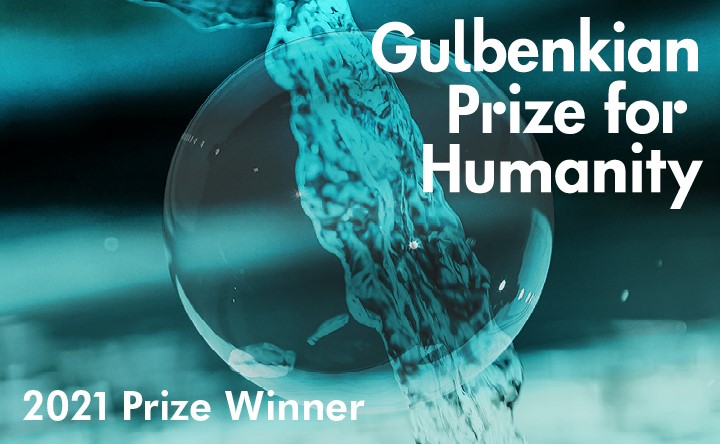 Lisbon, Portugal (26 October 2021): Today, the Global Covenant of Mayors for Climate & Energy (GCoM), was awarded the Gulbenkian Prize for Humanity along with 1M Euro to finance projects in Sub-Saharan Africa.

The jury of the 2nd edition of the Gulbenkian Prize for Humanity selected GCoM from among 113 candidates from 48 different countries for its unmatched ability to enhance and support city climate leadership across 11,000 cities and local governments worldwide to advance a low-carbon economy and society.

The ceremony for the attribution of the Gulbenkian Prize for Humanity will be held on the 9th of November at the COP26 conference in Glasgow, Scotland.

“The attribution of the Gulbenkian Prize for Humanity to the Global Covenant of Mayors couldn’t be more opportune and appropriate, given more than half of the world’s population live in urban areas, and cities account for more than 70% of global CO2 emissions,” said the Jury of the Gulbenkian Prize for Humanity. “The decisive role of thousands of cities to take meaningful and specific action to combat the climate crisis demonstrates the global reach of this organisation. The Gulbenkian Prize will support GCoM in raising voluntary climate mitigation and adaptation action with a special focus on two projects in Africa.”

These two projects will be carried out in close collaboration with the Covenant of Mayors in Sub-Saharan Africa, The Deutsche Gesellschaft für Internationale Zusammenarbeit and the European Investment Bank.

“Last year, the award went to an outstanding activist and fundamental voice in the fight against climate change,” said Isabel Mota, President of the Calouste Gulbenkian Foundation Board of Directors. “This year, the award goes to a fundamental voice for local communities and urban residents worldwide: the Global Covenant of Mayors. The Global Covenant of Mayors demonstrate the importance of city climate leadership in raising global ambition and will surely benefit the climate ambitions and action plans of several African cities in vulnerable areas that need all our attention.”

“We are truly honoured to receive this prestigious award,” said Frans Timmermans, Executive Vice-President of the European Commission and Co-Chair of the Global Covenant of Mayors. “Cities are trailblazers in the race to net zero and this prize recognizes the urgency of tackling the climate crisis across the globe. We will carry forward the momentum given to us by the Gulbenkian Foundation to support mayors who are leading the way to ambitious climate action.”

“Cities are the key to winning the battle against climate change – and by supporting them, and helping them work together, we can do a lot to speed up global progress,” said Michael R. Bloomberg, Co-Chair of the Global Covenant of Mayors. “We are honoured to receive this prize, and the funds from it will go towards GCoM efforts to help cities in Sub-Saharan Africa tackle climate change in ways that also help them recover from the economic impacts of the pandemic.”

Werner Hoyer, President of the European Investment Bank, said: “At the EU bank we are working closely with cities around the world to tackle climate change with transformative projects. We are delighted that this award from the Gulbenkian Foundation and the Global Covenant of Mayors will help build on EIB- supported projects with our partners at SONES in providing clean water to five cities in Senegal: helping to address the effects of climate change and to build resilience against disease.”

“On behalf of the team at Global Covenant of Mayors for Climate & Energy (GCOM) I want to sincerely thank President Isabel Mota and the Foundation for selecting us as the winners of the 2021 Gulbenkian Prize for Humanity,” said Arlene McCarthy, Acting Executive Director of GCoM. “It is a privilege and honour to be selected for this global award. It’s a testament to the hard work Mayors do on behalf of their citizens all year round to tackle climate change and a clear recognition of the leading role cities around the world are playing on climate action.”

In addition to facing critical funding problems, African cities face major challenges associated with climate change like water pollution, air pollution, and droughts, which pose a major threat to communities in the region.

“The Gulbenkian Award for Humanity prize funding will be used to assist Sub-Saharan African cities in moving beyond their citywide climate action plans and strategies and into project preparation for future investment,” said Mohamed Sefiani, Mayor of Chefchaouen Morocco and GCoM Board Member. “Thanks to the generous support of the Gulbenkian Foundation, in Africa we’re working towards a green and just recovery, which means more jobs, better public health, less inequality and a healthy planet for us all for generations to come.”

The 1M Euro ill be used to fund large-scale projects that will go towards advancing critical infrastructure projects to support climate mitigation and adaptation efforts in Senegal and Cameroon. In Senegal, five cities will be awarded funds to improve the supply of drinking water to help adapt to climate impacts such as droughts; and in Cameroon, one city will be awarded funds to support the development of energy efficiency solutions. The projects in Senegal and Cameroon were selected for their high potential impact. Specifically, selected projects had a high degree of climate ambition that contribute to the energy transition and climate resilience in Africa and were at an early planning stage, dependent on funding to progress and go beyond planning.

The Gulbenkian Prize for Humanity, awarded annually, in the amount of 1 million Euro, aims to recognise people, groups of people and/or organisations from all over the world that stand out and contribute to the mitigation and adaptation to climate change. The establishing of this Prize is aligned with one of the core missions of the Calouste Gulbenkian Foundation: supporting sustainable development, actively fostering the wellbeing and quality of life of vulnerable population groups, in harmony with environmental protection and economic prosperity. The Foundation considers any potential recognition areas those that can contributing towards reducing or absorbing greenhouse gas emissions; actions boosting the resilience of people and the environment towards the impacts of climate change; and as well as mobilising financial resources, whether public or private, to accelerate the decarbonisation of the economy. The first edition of the Gulbenkian Prize for Humanity awarded the young Swedish activist Greta Thunberg who decided to distribute the amount between several environmental and humanitarian projects.

Jorge Sampaio (1939-2021), former President of the Portuguese Republic, was the president of the jury until last September.  The vice-president is Miguel Bastos Araújo (geographer and winner of Prémio Pessoa 2018). It is also includes renowned figures such as Prince Constantijn van Oranje (leader of TechLeap.NL, Director Digital Technology & Macro Strategy at Macro Advisory Partners in London and New York and Edge Fellow at Deloitte Centre for the Edge), Hans Joachim Schellnhuber (Founder and Director Emeritus of the Potsdam Institute for Climate Impact Research), Johan Rockström (Director of the Potsdam Institute for Climate Impact Research and Professor at the University of Potsdam), Mariana Mazzucato (Professor in the Economics of Innovation and Public Value at U. College London and Director of UCL’s Institute for Innovation and Public Purpose), Miguel Arias Cañete (former European Energy and Climate Action Commissioner), Rik Leemans (Head of the Environmental Systems Analysis group of Wageningen University), Runa Khan (founder and Executive Director of Friendship NGO and Country Chair of Global Dignity Bangladesh), Sandra Díaz (Professor at the Universidad Nacional de Córdoba and member of the Royal Society), and Sunita Narain (Director-General of the Centre for Science and Environment and editor of the magazine Down To Earth).

About the Global Covenant of Mayors for Climate & Energy (GCoM)

GCoM is the largest global alliance for city climate leadership, uniting a global coalition of over 11,000 cities and local governments representing over 1 billion people and 100+ supporting partners. The cities and partners of GCoM share a long-term vision of supporting voluntary action to combat climate change and towards a resilient and low-emission society. GCoM serves cities and local governments by mobilizing and supporting ambitious, measurable, planned climate and energy action in their communities by working with city/regional networks, national governments, and other partners to achieve our vision.

The Global Covenant of Mayors is co-chaired by Frans Timmermans, Executive Vice President for the European Green Deal at the European Commission, and Michael Bloomberg, U.N. Secretary-General’s Special Envoy for Climate Ambition and Solutions, and Founder of Bloomberg LP and Bloomberg Philanthropies.