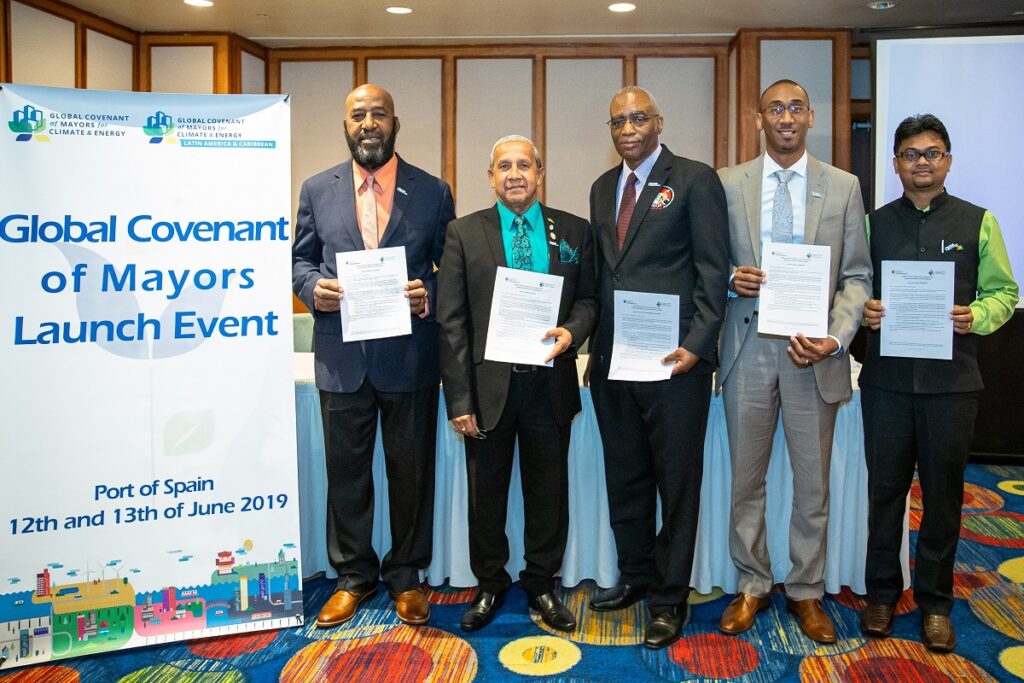 Port of Spain, Trinidad and Tobago.  The Global Covenant of Mayors for Climate and Energy (GCoM) was launched in the Caribbean region on June 12th in Port of Spain (Trinidad and Tobago), during the Caribbean Urban Forum (CUF 2019). The GCoM is an international coalition of city leaders committed to raising the global ambition for climate action.  The Global Covenant of Mayors for Climate & Energy in Latin America and the Caribbean (GCoM-LAC) aims to support the efforts of local governments in the region to reduce greenhouse gas (GHG) emissions and make their communities more resilient toward the effects of climate change. The implementation of GCoM-LAC is supported by the International Urban Cooperation Program (IUC), funded by the European Union.

During the launch of the Global Covenant of Mayors in the Caribbean, framed within the celebration of CUF 2019, mayors of Trinidad represented by TTALGA as well as the mayors of Belmopan (Belize), Georgetown (Guyana), Portsmouth (Dominica) and May Pen (Jamaica) showed leadership in agreeing to  take action on climate change by joining the GCoM. It means an increase in their level of commitment to the development of sustainability policies in their areas, with a focus on the achievement of the Paris Agreement goals at the local level. The Association of Local Government Authorities of Jamaica (ALGAJ) also signed a letter of intent to join the GCoM as Regional Coordinator, providing strategic guidance and support to local governments in the country.

In light of these facts, Local Government Municipality heads in the island state Trinidad and Tobago have agreed in Principle to sign on to the Global Covenant of Mayors for Climate change and to support and participate in discussions at meeting that are held here in Port of Spain”.

The Ambassador of the European Union to Trinidad and Tobago, Aad Biesebroek stated: “We very much welcome the Mayors of Latin America and the Caribbean to this very important climate and energy efficiency initiative.  Cities are an integral part of climate action and Mayors can contribute to

meaningful change.  The EU believes that we need to work hand in hand with cities around the world to reach our common climate goals. We encourage mayors to keep leading the way and through the ‘International Urban Cooperation Programme’ (IUC) the EU will continue to provide support”.

The Global Covenant of Mayors comes to the Caribbean at a particularly important time for the region, the most threatened on the planet by the effects of climate change and natural disasters, where 60% of its biodiversity is currently at risk. The Caribbean today faces the great challenge of having to deal with the impacts of severe climatic events and a changing climate despite having limited resources. Through the regional chapter, and as delivered by local and global city network partners, the Global  Covenant  of  Mayors  will  offer  technical  support  and  training,  and  work  with  signatory cities and sub-national authorities in the Caribbean to plan and implement climate initiatives more effectively.

The Global Covenant of Mayors for Climate and Energy is the largest global coalition of cities and local governments voluntarily committed to actively combatting climate change and transitioning to a low- carbon and climate resilient economy. Led by UN Secretary-General’s Special Envoy for Climate Action, Michael R. Bloomberg, and European Commission Vice President, Maroš Šefčovič, in partnership with local, regional and global city networks, the Global Covenant has 9.000 city signatories across 6 continents and more than 120 countries, representing over 800 million people or nearly 10% of the global population. By 2030, Global Covenant cities and local governments could collectively reduce 1.3 billion tons of CO2 emissions per year from business-as-usual – equal to the emissions of 276 million cars taken off the road. Learn more at: www.globalcovenantofmayors.org

GCoM LAC is the chapter for Latin America and the Caribbean in the Global Covenant of Mayors. The implementation of the regional chapter of the GCoM-LAC has the financial support of the European Union through the “International Urban Cooperation Programme (IUC)”. For more information: http://pactodealcaldes-la.eu/ (soon available also in English).

Funded  by  the  European  Union,  the  International  Urban  Cooperation  (IUC)  programme  supports  the achievement   of   bilateral   policy   objectives   as   well   as   major   international   agreements   on   urban development and climate change, such as the New Urban Agenda, the Sustainable Development Goals, and the Paris Agreement. For more information, please reach us at: www.iuc.eu.