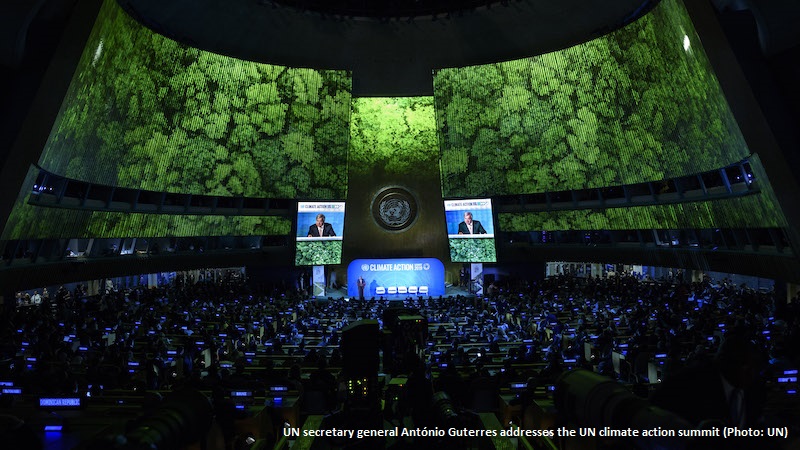 BARCELONA, Sept 23 (Thomson Reuters Foundation) – Close to 30 global initiatives to ramp up action on climate change were unveiled or expanded at the U.N. Climate Action Summit in New York, the United Nations said.

Bringing together governments, businesses, development banks, cities and green groups, they cover everything from zero-carbon buildings to cleaning up air pollution and a platform for poor countries to access international finance for clean energy.

Here are 12, announced alongside commitments by about 65 countries to upgrade their climate plans, with the aim of upping the world’s chance of reducing planet-warming emissions to net zero by mid-century and meeting agreed temperature limits:

1. Almost 90 companies with a market capitalisation of more than $2.3 trillion and annual direct emissions equivalent to 73 coal-fired power plants pledged to take action to align their business plans with scientific targets laying out what is needed to keep global warming to 1.5 degrees Celsius.

2. The Powering Past Coal Alliance said it had added seven new members, to include 32 nations, 25 states or regions, and 34 companies committed to phasing out coal power generation and ending the building of new coal power plants by 2020.

3. The Net Zero Asset Owner Alliance, a group of the world’s largest pension funds and insurers – which together manage $2.3 trillion in investments – agreed to make their investment portfolios carbon-neutral by 2050.

4. The International Development Finance Club, a leading group of 24 national and regional development banks, set a goal of raising $1 trillion by 2025 for climate action in poorer countries, with an increasing share of that going to work to help them adapt to climate threats and build greater resilience.

5. The City Climate Finance Gap Fund backed by the Global Covenant of Mayors for Climate and Energy, together with Germany and Luxembourg, said it would provide up to 50 million euros ($55 million) in grants to develop low-carbon, climate-safe infrastructure projects in cities. It hopes to be able to double the grants to unlock at least 4 billion euros in investment, and will work with at least a dozen cities per year.

6. The Zero Carbon Buildings for All Initiative pledged to ensure new buildings produce no more climate-changing emissions than they can absorb by 2030, with existing buildings meeting that goal by 2050 in member countries around the world, which include Kenya, Turkey, the United Arab Emirates and Britain.

7. A new Climate Investment Platform will enable developing countries to access finance for clean energy investment more easily. Support for other areas of climate action, such as adaptation, land use, cities and infrastructure, would be added in 2020, its backers said.

8. The “Three Percent Club”, a coalition of 15 countries, as well as businesses and institutions, said it would work to drive a 3% annual global increase in energy efficiency, up from 1.3% in 2018, by including measures in national plans and sharing expertise.

9. The Bill & Melinda Gates Foundation, the World Bank, the European Commission, Britain, the Netherlands, Switzerland, Sweden and Germany promised to invest more than $650 million in the CGIAR group of agricultural research centres over the next three years to help 300 million smallholder farmers in developing countries adapt to climate pressures. The funding is part of a broader commitment of more than $790 million to address the impact of climate change on food and agriculture.

10. The Coalition for Climate Resilient Investment – a group of 34 companies and organisations managing assets worth $5 trillion – said it aims to ensure that finance for infrastructure takes into account climate risks, leading to more robust roads, bridges, energy, telecoms and other key services.

11. The Clean Air Initiative will urge governments at national and local level to commit to achieving air that is safe and healthy, and to align their climate change and air pollution policies by 2030. A Clean Air Fund – with $50 million in initial funding – also was launched to tackle outdoor air pollution and reduce related deaths. The fund aims to raise a total of $100 million.